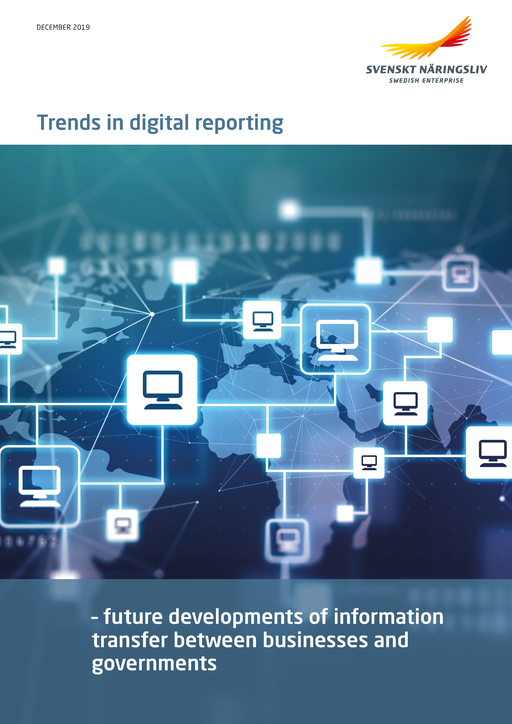 This report is the result of an assignment to Deloitte Sweden to provide an overview over some current trends in digital reporting from businesses to governments, with the aim to create a platform for a deepened and more initiated discussion of possible future pathways.

The report shows that digital reporting requirements seldom derive from one single driver. Improving tax collection capabilities is an important motivator in many jurisdictions, but the ground for digitalization of reporting requirements does not necessarily have to be associated with the collection of tax. Simplification and release of administrative burden for in particular SME:s are also important drivers. Digitalization is for example seen as a key instrument to implement the once-only principle (TOOP), meaning that business entities should only have to report a particular piece of information once to the government.

From a business perspective, there is evidently much to be gained from facilitated reporting processes, increased possibilities for information re-use and thus, an eased reporting burden. Digitalization of reporting obligations is however not unproblematic. Digitalization creates conditions where it is possible to collect large quantities of data to which advanced analytical methods can be applied. Larger data flows and the re-use of reported data thus raises questions regarding business integrity, confidentiality and potential misuse of information. Another aspect of the digital development is the potential to shorten reporting periods significantly and to transfer data in real-time.

Despite various common initiatives within the EU and OECD, the degree of international harmonization in the area of digital reporting is generally low. For large enterprises that operate in several jurisdictions, it is difficult to find universal systems and processes that meet the various reporting requirements. The report highlights the importance of flexible technical solutions, that allow businesses to make their own choice of software and service providers.

Going forward, digitalization and demand for standardized data will most likely also influence the content of the reporting requirements. On the tax-reporting side, we see a discussion on how to make the tax legislation more code friendly in order to allow for automatic tax assessments within the systems of the reporting entity. For government authorities and enforcers, the digital development enables the use of new supervisory tools and methods. The report underlines the need to strike a balance between the authorities’ enforcement power and the risk of formal reporting errors, in order to safeguard the legal rights of reporting entities.